Do you know that old Rachael Ray show where she was challenged to eat three delicious meals in one day without spending more than $40? Well, I found a place that could have easily been on her list!  A friend and I had the opportunity to dine at City Tacos in North Park.  Let me tell you it was a taco fiesta!  The menu offers a great selection for meat eaters, vegetarians, and seafood lovers as well!

Let's begin with the salsa bar. In addition to the regular green and red salsas that most tacos shops offer, I appreciated the chunks of jicama and cucumber available to cool your palate after eating some heat. 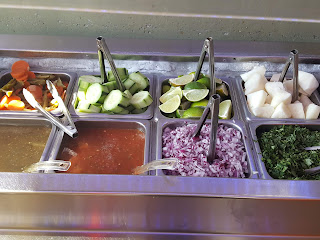 In addition they had some signature salsas that were new to me! 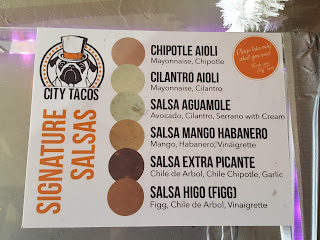 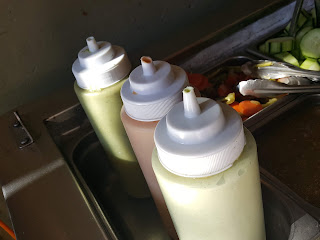 We sampled the whole rainbow and I especially liked the salsa mango habanero on some chips with  guacamole....muy delicioso! And I REALLY REALLY liked the cilantro salsa! If they sold that in a bottle I would buy it! The chips were fresh from the fryer and the guacamole was the real thing! No thinned down saucy guac here! 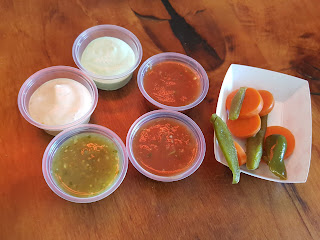 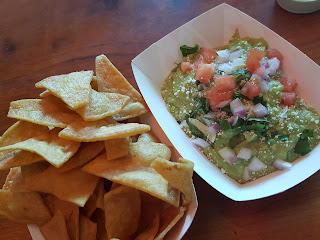 My friend and I grew up in South San Diego, with some taco shops within walking distance that we  frequented on a regular basis even before we could drive, so we've been eating tacos forever! We always have Carne Asada and Pollo Asada tacos, so we opted to try a birria taco here at City Tacos. First of all the meat portion was very generous as you can see, topped with pickled onions.  This taco sells for $3, with two house made corn tortillas to soak up all the au jus that the meat has been stewing in! We pretty much divied this into two separate tacos and ate it all up! 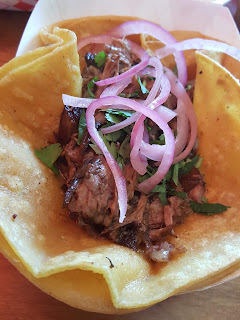 Next up was the surf and turf taco, a mix of garlic sauteed shrimp and rib eye steak. There was a white sauce served on top which again should be bottled and sold separately!  The rib eye steak was cut a little too thick to eat delicately but the flavor was definitely good!  Personally, I don't like to mix my meat and seafood in one bite, but that sauce was soo good, I made an exception! 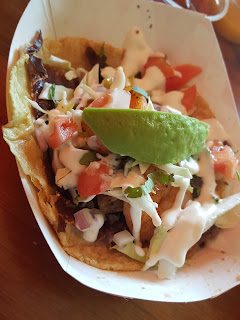 A third taco we tried was the Puerto Nuevo taco, a fried lobster tail served over beans and topped with crunchy rice noodles.  I am a texture girl, so the rice noodles were a fantastic element to add for some crunch without disturbing the flavor of the lobster.  My picture does not do justice to the size of the tail.  This one was served on top of a house made flour tortilla.  I prefer corn tortillas, so I'm sure if you asked for it, they would substitute the tortilla! I know for next time! 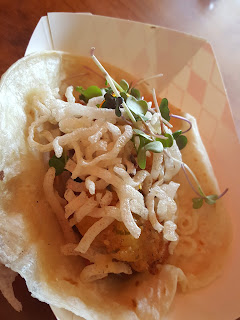 The next taco we had was an El Especial taco, Panko crusted snow crab, squid, and octopus! This is for your seafoodies!  I loved this taco. The seafood was cooked just right. With seafood you have to time the squid and octopus, otherwise it can get rubbery real fast. 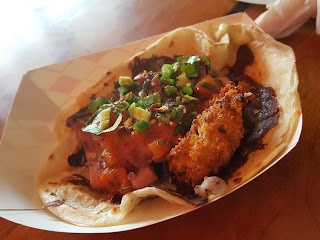 I uncovered it so you can see all the seafood! I felt like I was eating a deconstructed cocktail without the clamato!  All of this for $4! Unbelievable! 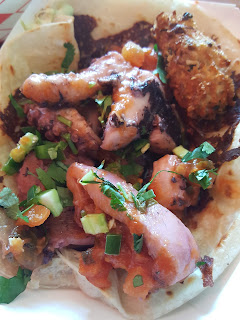 I couldn't figure out what the crusty brown layer was on the bottom of the taco melted onto the tortilla.  Then it hit me, it was the Oaxacan and Cotija cheese mix that they must grill on the taco. Take a closer look! 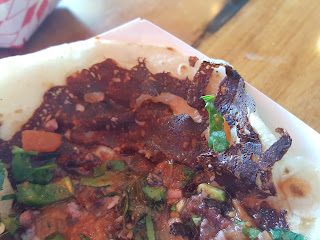 This was a first for me! I loved it, even though it was on a flour tortilla, hahaha!

The final taco we tried was a vegetarian options, the portobello and vegetables taco. This can also come vegan if requested. This was a mountain of vegetables and argula! I used a fork and ate it like a salad as it was huge! I think I would have enjoyed it more if they used bigger portobello mushrooms instead of the baby ones. The thicker slices would make it seem more like you're eating a steak taco.  I am a mushroom person, but I guess not in tacos. It was just ok for me, but really pretty! 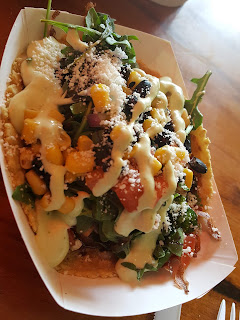 A Mexican food connoisseur friend once told me that he judges a taco place not only on the taco meats, but also the beans. Here at City Tacos, the pinto beans are served whole with bits of chorizo, ham, are carnitas.  This is a side order, which could easily be an entree in itself, at least 16 oz.! So good and for only $4! 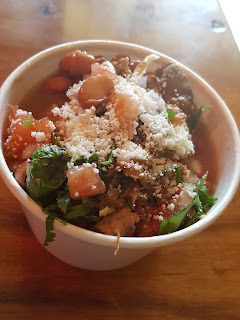 Do you see all the yummy bits in this spoonful? 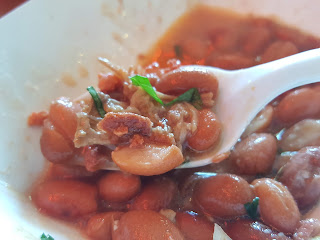 The only dessert on the menu, if you still have some room that is, are churros!  These contained a surprise filling, I want to say caramel, but not sure. The chocolate and cajeta dipping sauces come with every order.  Piping hot and crispy! How could fried dough with sugar not be yummy! Of course, 5 out of 5 stars! 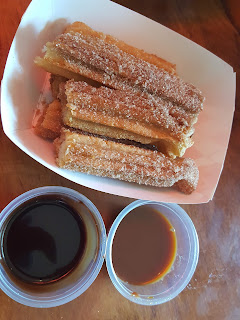 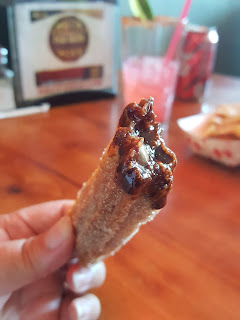 I sipped on a Strawberry Margarita while we worked our way through the food fiesta! There is also a variety of cervezas available too! 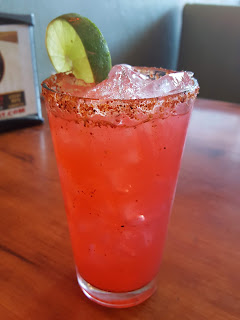 These are just a few of what they sell. 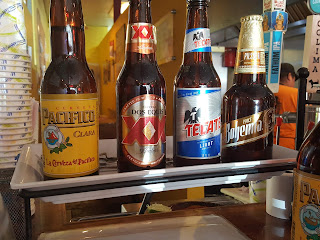 The place is kitschy and the people are fantastic. Sandra took great care of us. 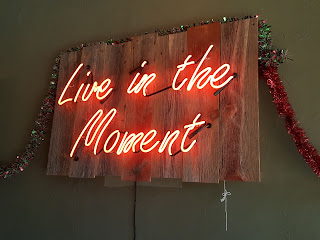 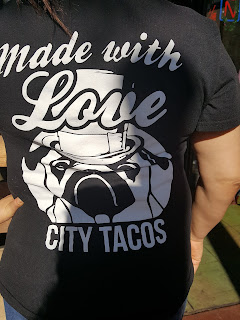 I did feel the love in their food. I'll need to go back and take my taco-loving husband and kids ! Get there early because you may work up an appetite trying to find parking and the place is smallish with limited seating.  There was a woman who didn't mind wiping down a table just to get a seat and Sandra immediately stepped in and said she would take care of it! That's how popular this place is! City Tacos has locations in North Park and La Mesa, and are opening up other locations in Imperial Beach and Encinitas so you can find one that is closest to you!

If I were Rachael Ray and still had that show, City Tacos would definitely be at the top of my list!  A taco, if you could choose just one, an order of guacamole and chips (to eat with the addicting cilantro salsa!), and one of their sides or an order of churros would be very filling and under $20! Go live every day like it is Taco Tuesday and visit City Tacos! 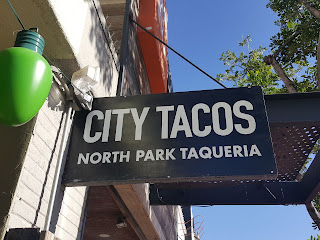 Disclosure: Me and a guest received complimentary fare in exchange for this blog post.
Posted by LoraSaysSo! No comments:

"The Wonderful Winter of Oz" in Pasadena! 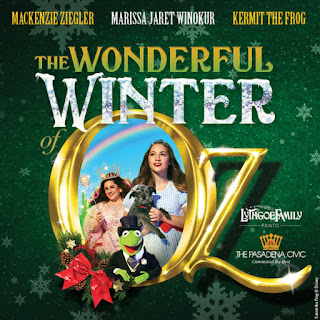 December 15 – 30, 2018
Pasadena Civic Theatre
300 East Green Street
Pasadena, CA 91101
Lythgoe Family Panto (LFP)
in association with Pasadena Civic Auditorium presents THE WONDERFUL WINTER OF OZ
Book by Kris Lythgoe
Choreographed by Napoleon and Tabitha D’umo (NappyTabs)
Music Direction and Arrangements by Michael Orland (American Idol)
Directed by Bonnie Lythgoe
This Holiday Season, fly over the rainbow with Lythgoe Family Panto's THE WONDERFUL WINTER OF OZ! Join Mackenzie Ziegler ("Dancing with the Stars: Juniors", "DanceMoms") as Dorothy, Tony Award winner Marissa Jaret Winokur ("Celebrity Big Brother " Winner and Broadway's Hairspray) as Glinda, Kermit the Frog® as the Wizard of Oz,Jared Gertner (Broadway's The Book of Mormon) as The Scarecrow, Phil LaMarr ("Mad TV" and "Pulp Fiction") as The Tin Man, Juan Pablo Di Pace ("Dancing With The Stars" and "Fuller House") as The Cowardly Lion, Yvette Gonzalez-Nacer (Nickelodeon's "The Fresh Beat Band", 'Cha Cha' on FOX's "Grease: Live!", National Tour of In the Heights) as The Wicked Witch of the West, Hailee Payne and Valerie Rockey (of "So You Think You Can Dance") and Rescue Dog Pickle C. Irwin as Toto.
An updated version of the beloved classic, in the style of a traditional British family Panto, THE WONDERFUL WINTER OF OZ features family-friendly magic, with a comedic twist, dancing (with “So You Think You Can Dance” alumni), contemporary music and more.

Tickets start at $40 and Family Four Packs for just $99 can be purchased at the Pasadena Civic Auditorium, online at www.thepasadenacivic.com or by calling 800-982-2787. Golden Tickets, which allow the ticket holder (children ages 4 – 12 only) a special on-stage experience during the production, are available for an additional $75.00 each.  Group discounts (for groups of 8 or more) are available by emailing groups@americanpanto.com. This will be the seventh holiday season of Lythgoe Family Panto in Pasadena, and the second at the Pasadena Civic.TIX: https://bit.ly/2yUBhpf

Winter Wonderland: Audience members can enjoy this FREE pre-show celebration featuring crafts, games, Santa Claus (on select days), photo opportunities, and more! Starts one hour prior to curtain time.
Previously Lythgoe Family Panto established their reputation with productions including Beauty and the Beast: A Christmas Rose starring Kellie Berglund, James Snyder and Gedde Watanabe, A Cinderella Christmas starring Lauren Taylor, Alex Newell and Morgan Fairchild, Peter Pan and Tinker Bell - A Pirates Christmas starring Sabrina Carpenter and John O’Hurley, Sleeping Beauty and Her Winter Knight starring Olivia Holt and Lucy Lawless, Aladdin and His Winter Wish starring Ben Vereen, Jordan Fisher, and Ashley Argota – and A Snow White Christmas starring Ariana Grande and Neil Patrick Harris.
Lythgoe Family Panto produces fun, musical theatre the whole family can enjoy. Known for their creativity and involvement in television hits “American Idol” and “So You Think You Can Dance,” the Lythgoes are dedicated to bringing affordable theatre to families across America. Based on the Grimm fairytales and others, each story has been modernized with topical scripts for parents and well known pop songs for kids. The Lythgoes pride themselves on creating a memorable experience a family can share together. In 2017 over 6000 Title 1 students were introduced by the Lythgoe’s to live theatre, through the medium of Panto.

Disclaimer: I received 4 complimentary tickets in exchange for this post.
Posted by LoraSaysSo! No comments: 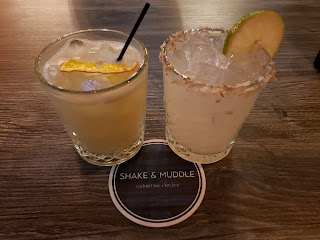