Nine Steakhouse ranks a TEN at The Palms 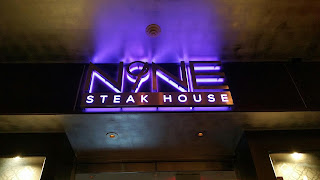 My hubby likes steak. I prefer seafood, but since Father's Day just passed, I acquiesced for my husband's request to dine at Nine Steakhouse in the Palms Casino.  Fortunately it happened to be Las Vegas Restaurant Week and we certainly took advantage of the specially priced menu! We were asked if we wanted a booth or table.  I like the feel and intimacy of a booth, so that's what I responded with, but I don't like scooching in to get to the center of the seating area.Our waitress Raquel took care of that though. She pulled the whole table out into the walkway so we could easily sit down in the middle! She did it with the quickness too, like in .5 seconds, and nothing on the table toppled over! My jaw dropped, I had never seen that before! I considered that my free Las Vegas magic show, lol!

I started off with a s'more cocktail.  Do you see the roasted marshmallow and graham cracker crust around the rim? I didn't even detect any alcohol because it tasted like a yoohoo! Yahoo! But I felt the effects about 15 minutes later! 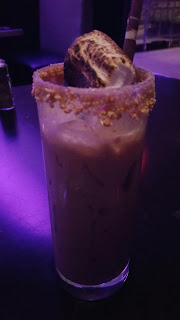 The amuse-bouche consisted of shrimp cocktail bites. Then, the bread came out! I didn't capture the bread basket, but it was a selection of bite-sized rolls, focaccia, and pretzel bread served with butter of course, and mustard for the pretzel! A pleasant surprise of a bread basket! 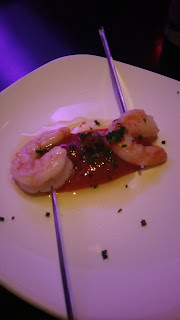 Next, our soups and salads arrived. Yes, Soup AND Salad! Usually, restaurants have you pick one or the other! The concept reminded me of Panera Bread's You Pick Two, hahaha.  Eric had the French Onion Soup and the Garbage Salad. It had hearts of palm, olives, salami, a little bit of everything. 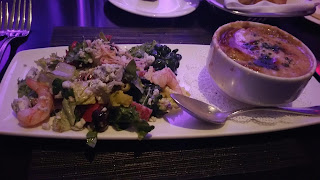 I had the Lobster Bisque and the Bacon Caesar Salad. Everything was delish, the soups more than the salads! 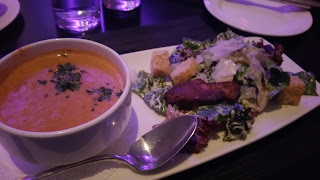 Then the entrees came, Eric's Ribeye Steak and my Oven Roasted Fire Chicken.  After eating a piece of the steak, I immediately regretted not ordering the same! We intentionally ordered different items in order to sample but, I wanted to slap my forehead, I mean I was in a STEAKHOUSE after all, order a steak woman!  I am not making that same mistake twice. The chicken was huge, like a half of a whole chicken, but the taste was just ok. There were jalapeno slices on the chicken, but it wasn't fiery.  The steak came with three different sauces: horseradish, house peppercorn, and a bearnaise sauce. I usually eat horseradish, but I really enjoyed the peppercorn sauce, I even dipped my chicken in it! 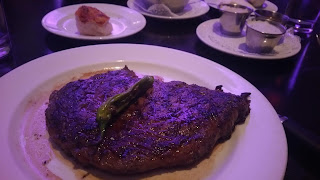 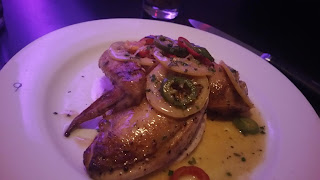 We ended up eating most of the steak and the chicken wing and some of the breast.  It was really too much, even for hearty eaters like us! I overheard our neighbors in the next booth when they ordered. They were going to split a salad and a steak.  I don't know if they would do that for this set menu, but it is worth asking. We could have easily shared the food and be totally satisfied.
To top off our dining experience, we were EACH served a dessert!  Again, most restaurants for restaurant week offer a dessert to share. I was really impressed with their generous servings. Dessert was a flourless chocolate cake with blood orange sauce served with orange creamsicle ice cream and a whipped cream canelle.  The cake was more like a mousse with a creamy ganache on top, but it had this crunchy, hazelnut torte crust on the bottom that sent me over the moon! I'm all about the textures! That steak and this dessert are in my Nine Steakhouse brain file for next time! 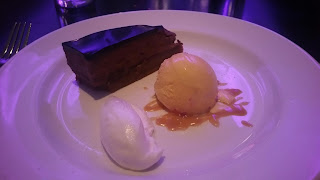 For a price of $50 pp, this was a reasonable steakhouse dinner! The good news is they have this prix fixe menu as a standard option and for $9 more, you even get wine pairings with the courses-what a value! Forget calling it NINE steakhouse. In fact,  I'm going to start calling it TEN steakhouse!

(Aside, I want to forewarn the ladies and save you from an unnecessary heart attack. There is an attendant in the bathroom! She spooked me! The bathroom has only two or three stalls and so it is not huge.  I entered through the door and turned the corner and there she was! I almost bumped into her! It was kinda strange to have someone waiting for you after you've done your business. I mean, geez, she could hear everything going on, a bit uncomfortable to say the least. I don't even know if she really worked there, hahaha. And on the counter, there were products for all your grooming needs: combs, brushes, hair spray, styling gels, perfumes, lotions, even a jar of candy.  I didn't bring any cash otherwise I would have given her a dollar for the mint I took and for offering me a paper towel. She stationed herself in front of the towel dispenser and trash can, so we did a little dance when I tried to dispose of my towel. Strangely enough, I felt like I made a new acquaintance considering we shared an intimate bathroom moment without exchanging any words! ANYWAY, it was an unusual/quirky experience. I would imagine there is a male attendant in the respective bathroom too! Note to self, use the restroom out in the casino next time!) 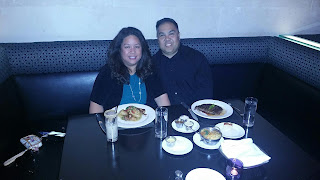