LEGOLAND's Ninjago World - Get Your Inner Ninja On! 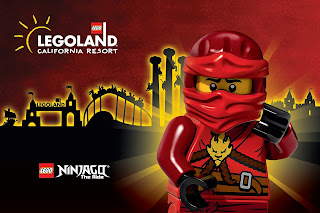 It was truly exciting to attend the Media Preview Day of Legoland's Ninjago World on April 28, 2016 as an Official Legoland Blogger! Naruwan Taiko performed at the opening ceremony as well as some ninjas that literally flew through the air!

What is Ninjago? LEGO Ninjago is the story of four young ninja heroes – Kai, Jay, Cole and Zane – who train under the watchful eye of Master Wu to master an ancient martial art – Spinjitzu.
The main attraction at Ninjago world is NINJAGO The Ride! It was a special experience to be the first to ride this! NINJAGO The Ride enables guests to demonstrate their ninja skills without the use of a hand held device.  Riders simply use their hands!  Remarkable technology recognizes hand movements that simulate throwing fire balls, shock waves, ice and lightning to defeat villains.  Riders collect points for their training and battle efforts throughout the ride and scores are displayed when their quest is completed. Effects such as heat, smoke and wind are incorporated throughout the adventure, giving guests the ultimate interactive 4D experience.

Before guests board NINJAGO The Ride, they have the opportunity to train like a ninja in four other attractions throughout NINJAGO World: Zane’s Temple Build, Kai’s Spinners, Cole’s Rock Climb and Jay’s Lightning Drill. All are designed to test guests' balance, agility and speed.
ZANE’STEMPLE BUILD: Guests can tap into their inner imagination and create LEGO models inspired by NINJAGO.
KAI’SSPINNERS: Guests can test their balance as they stand on one of Kai’s spinning platforms and twirl!
COLE’SROCK CLIMB: Grab a hold! Kids can test their agility as they scale a rock wall.
JAY’SLIGHTING DRILL: Are you lighting quick?  Guests can test their speed by pushing the lit up buttons in the speed cage.

After fighting off the evil villains, you'll probably have worked up an appetite! NINJA KITCHEN is also in Ninjago World and serves up a special twist on Asian street food with Banh Mi Vietnamese sandwiches on fresh baked baguette or steamed Bao Buns with your choice of crispy pork belly, lemongrass chicken or baked sweet chili tofu.  My son ate two Bao Buns! The dough was soft and pillowy and the pork belly had the right balance of sweet and tangy.  Oishii!

Of course you'll also want to commemorate your time as a fighting ninja after visiting Ninjago World! WU’S WAREHOUSE has plenty of items that guests can pick-up as a gift or souvenir when they exit NINJAGO The Ride.

Legoland California has so much to offer!  The Water Park, Aquarium, and now Ninjago World, it is such a great place to make some fabulous LEGO memories! Ninjago World opens on May 5! See you there! 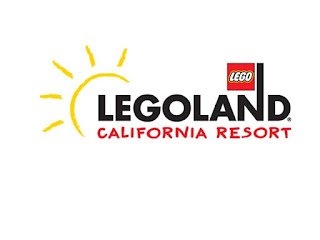