The Time I Met the One and Only Queen Regine Velasquez Alcasid! 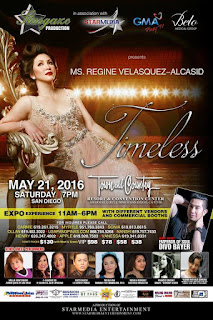 Asia's Songbird, the one and only Regine Velasquez-Alcasid, came to San Diego recently for a "Timeless" concert!  It had been awhile since her last concert here in southern California and her fans were excited to see her again. Representing the San Diego Filipino Blogger Network, I was able to have my one and a half minutes of QT with her at the press conference held the night before. 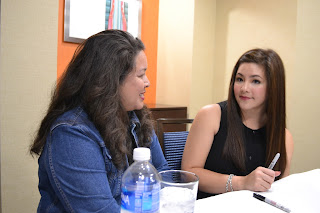 What did I learn about her?  That she's been in the business for over 30 years! That she started as a teenager by winning a singing contest but has graced her fans with her gifted voice AND acting skills. She is currently starring in her own teleserya, "Poor Senorita" and this as well as the focus on her family are her priorities at the moment.  I have seen some of her movies and call her a lucky gal to have starred with some of my Filipino actor crushes, especially Aga Mulach!

Accompanying Regine on her tour were her sisters, Deca and Diane. Here they are with some of Regine's super-fans,  JJ Pua and my pare Rex Cruz, who have been her supporters for more than 20 years! She lovingly acknowledges them and thanks them for their support in her interview with me.  Most of all she gives credit to God for her longevity in the entertainment business. 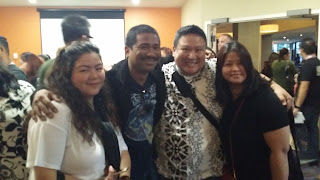 This megastar was truly humble, patient and just a very sweet person in general, someone you really could call a friend. Her concert is aptly name as she is certainly timeless in her beauty and in her heart! Here is the clip of my short interview with Ms. Regine!  Enjoy!

Just added, a clip from her San Diego concert too!