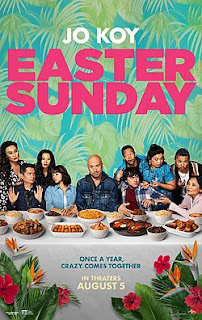 This weekend my family and I watched "Easter Sunday" a film featuring a Filipino-American cast starring popular comedian Jo Koy. I was so excited to watch it on opening weekend, I took my 79 year-old Mom and my 16 year-old son to watch it with me and my husband. Other family members joined us at the theater as well. Why? Because this was the first film backed by major studios Universal Pictures and Dreamworks, and Hollywood behemoth, Steven Spielberg. You may remember another Filipino-American film, "The Debut" that came out in 2000 and was also shown in theaters nation-wide, but that was due to the grassroots efforts of fundraising and publicity by the director and cast. It has taken twenty plus years since then for Hollywood to greenlight a Filipino-American film, a huge acknowledgement in the industry.

I wanted all three generations of my family to see a Filipino-American family on the big screen. For an hour and a half, we watched a Filipino family cope with their financial problems, family relationships, particularly the fear of not being "good enough" as a mom, as a son, as a dad. My mom identified with the grandmother character, I identified with Jo Koy and his generation of cousins and my son connected with the son character in the movie. The film wasn't created to win an Oscar, but all three of us laughed throughout the film. It is a comedy after all. The studio played it safe and made the film on a pretty lean budget by Hollywood standards and although the numbers were not what I hoped they would be for an opening weekend of a major film, it is most definitely progress. I wish to share more moments like this in my lifetime with my family.