L and D go to White Castle! A Girl's Getaway in Las Vegas!

A few days ago, one of my BFs and I went on a quick girl's getaway trip to one of our favorite cities, Las Vegas!!!  It's been a long time since we've done an overnight trip, so we were really excited to escape for a few days! D and I have been friends since 3rd grade! We went to elementary, middle, and high school together and 30+ years later, we still hang out. Here we are on the plane, on the first flight of the day!

I enjoyed this trip for many reasons!  First, it was almost 72 hours of not having to worry about anything and anyone other than ourselves!!  We both have sons who are really attached to us. So having some alone time and personal space were really refreshing! We did what we wanted, ate what we wanted and even tried some new things!  Most of all, we shared stories and laughed with and AT each other. That's how best friends should be able to hang.

USING LYFT
We planned this trip literally a week before we went so we looked at it as a gift from our husbands and to ourselves. However since it was last minute, we didn't have a chance to save for it. So being on a budget, one of the things we decided to pass on was renting a car.  I had used Uber on a previous family trip earlier this year and loved it. It  being a Tuesday when we arrived, I had previously seen T-Mobile Tuesday giveaways that typically included a free Lyft ride. I found it and quickly redeemed it on my phone and scheduled our first ride from the airport to our hotel. We had to look for the designated floor in the airport parking garage for rideshares. (Actually, since Lyft and Uber have exploded, almost all of the hotels have a separate entrance designated for rideshares away from the main entrance. I don't know how taxi cabs will continue with these other options providing competitive rates for the same service, but I digress.)  Anyway, our driver was there within minutes and delivered us promptly to our hotel. I thought the ride was free, but I was charged $14 something! The airports adds on a couple fees. I didn't read the fine print on the T-Mobile giveaway. The free ride was available starting three days later.  D laughed at me!  Oh well, read the fine print folks!

D didn't have a Lyft account yet, so she signed up and we took advantage of the new user promo. Lyft gave her a $50 credit, which was $5 off the first 10 rides. And since she signed up with my referral link, I got a $10 credit.  So at least I got one ride free!  We used Lyft at least 7 times while we were there and most of our rides were either free because they were under $5 (using the applied promo) or ranged from $1 to $9.  Overall, the costs of using Lyft during the time we were there did not exceed $35 TOTAL! Can you imagine what we would have spent in terms of renting a car, gas, parking fees (which the major hotels charge now) plus the time spent driving place to place, looking for a parking space and walking to an entrance.  All but one of our drivers received 5 star ratings from us. Most of them were former limo drivers or past taxi drivers. They were friendly, courteous, offered water bottles, snacks and phone charging service.

The one female driver we got, I would rate 2 stars for these reasons: First, she got lost finding us and passed by us TWICE! We were standing out in the cold for ten minutes even after giving her a description of where we were. She had to call us twice as well. Though she was nice enough and apologized profusely for not finding us. Secondly, two stars because her car smelled like smoke!!! Yuck.  I wrapped my scarf around my mouth and nose to minimize the odor.   Then, she delivered us to the hotel NEXT DOOR to where we wanted to go.  She said she was following her GPS.  We went through the back streets to try to get to our hotel, but you know pedestrians there, they cross even on red, so we literally got held up at a corner.  D finally told her that we would just get off there at this corner.  I was relieved because I was able to get out of that car and BREATHE! Other than her, every driver was familiar with the ins and outs of the hotels we went to and knew where to go. We never waited longer than three minutes for a pick up, and this was door to door service. Thumbs up to Lyft! The next trip we go on, we plan to do the Uber new user promotion for discounted/free rides!!!

21,000+ STEPS A DAY SO WE COULD EAT!
Since we stayed at a hotel in the middle of the strip, we did a lot of casino hopping and walked over 21,000 steps a day! I'm a total foodie, D not so much, but she was game. So we would walk, eat, walk (and play too!), have a snack, 2-3 hours later eat, walk some more, eat, it was a literal work out! The pedometer on my phone said I reached my highest walking records of the year the two full days we were there! These are all the casinos we visited:
Bally's
Paris-beautiful Eiffel Tower at night

Lucky Dragon
Side note on Lucky Dragon:  It just opened and imo, not worth visiting. Very small casino. Like 5 people were playing there including us. Although the food court looked promising! More people were standing in line for the bao buns than playing slots. How will they survive?  My theory is that it is a front for a Chinese billionaire laundering his money through, hahaha, just kidding! It is a beautifully decorated casino though. Here's Lucky's Dragon's chandelier! Back to the list....

That's eighteen casinos in two and a half days! Whew! And like I said, walk, eat, walk, eat, so now, a few pictures of the food...I ate an Umami burger for the first time!  $15 but oh so good! I'm going to replicate that parmesan crisp at home!

We also explored the Grand Bazaar shops in front of Bally's around 8:30 pm one night. There were a lot of people lined up outside this particular ramen eatery.  It was like 35 degrees or something like that, and I wanted a hot soup, so we signed our names up on the clipboard. You know the place must be relatively good if they have a clipboard system, right?  A couple even came outside with an employee after they ate and took a picture with him. I couldn't figure out if he was the owner or what. While we waited, I looked the place up. Ramen-Ya is the sister restaurant to San Francisco's Michelin starred Katana. No wonder people wanted to eat here. After a 45 minute wait, we were seated. The food is good and very reasonably priced! This is the Tonkatsu ramen with karaage and gyoza.

There was also a counter-service schwarma place a couple doors down, no seating though, that also had a long line.  Wahlburgers is located in this marketplace too.  We're going to visit those next time!

And last but not least, D and I made it to White Castle! It wasn't our mission or anything, but we were walking by and saw it! It is on the strip inside Casino Royale. The line wasn't long and people were ordering sliders like crazy. The people in front of us spent $60! The sliders are small and can be purchased in packs of ten and even a case of one hundred is available! We just ate our lunch two hours earlier, so we both just had one double cheese slider.  Shame on me, I forgot to take a picture!!! Here's one I found on the internet, but ours was not as high, it was smushed down and that's what it tasted like, smush. Baby food texture meat with really soft bread.  I guess because they steam the patties on top of the onions or something like that. I've had White Castle before and it was alright, but not something I would stand in a long line for!  D said it tasted just like the frozen ones so I don't really understand the hype. 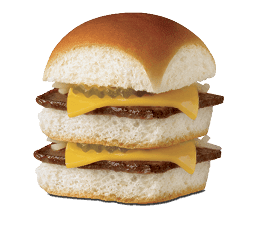 LAS VEGAS FIRSTS!
Although I have been to Vegas many many times since I turned 21, there were some firsts that I experienced on this trip.
Here's our teppanyaki chef, Cody, working the spatula! He's from Osaka, j/k!  He was very nice. He asked me and D if we were going to watch any shows and said "Chippendales?" I quickly replied, "Why, is that where you work after this? Will we be seeing you there?"  He laughed and ended up talking to mostly me the rest of the time. I guess he felt comfortable after he asked us all what we do and when I told him I am an Assistant Principal, he said, "Oh, I would have been spending a lot of time in your office." He looked like Chris Pratt to me.

(Birdwalk) The family of 3 next to us at the table was very interesting.  Caucasian Dad, Chinese mom and their daughter. Chef Cody asked us all where we were from.  They said they were from San Francisco but just for about 9 months now. They moved from Shanghai.  I asked them if they were able to see the opening of Shanghai Disneyland.  "No." the mom said, however the Dad did some work for it! Then we learned that they have traveled all around the world and the little girl, who is seven, with the exception of Shanghai Disneyland, had been to ALL OF THE OTHER DISNEYLANDs already! OMG, this little girl has completed my bucket list and she's only SEVEN! This is one moment, out of many, where D was laughing at me after the meal.  Remember Chef Cody asked if any of us were going to see any shows? The mom mentioned they were trying to get Blue Man Group tickets the previous night but were too late. I tried to sell them on this show we saw last year, the Mac King Comedy show, only around $15 and told them they had tickets at the Half Price Tix store in the mall so a really good price! This was before we heard the mom talk to us about travelling every year to Paris, Spain, Denmark, Netherlands, all over Europe  and that their daughter is bilingual in English and Mandarin and that the Dad worked for Disney, etc! These people were rich!!! And here I was telling them all about this great bargain show, LOL! They obviously didn't have to worry about a budget while on vacation. We had a really good laugh about that, oh well! Back to "firsts"...

We had so much fun on this trip! We decided to try and make this an annual one. My husband has been taking an annual Las Vegas trip with his buddies for at least 9 years now so now I say, ME TOO, ME TOO!

To close, ladies, if you have the opportunity to escape your daily life for a few days, DO IT! We didn't win a monetary jackpot, but D and I came back happy, relaxed and ready to get back to being the best wife and mom we can be! Giggling with her for three days really made this a memorable trip! We were definitely rejuvenated and added another memory to our friendship book!
Posted by LoraSaysSo!