Labor Day Weekend at SLS Las Vegas - For the chic and sexy! 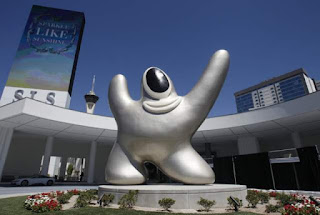 Service. Luxury. Style. Seek. Live. Socialize. On social media, there's different words used to describe this new resort and casino that recently took over the demolished Sahara's location.  Located at the end of the strip, SLS is trying to make a name for itself.  I visited the casino last March for mine and my hubby's birthdays. We like to check out new places. I signed up for their player's club, and played for about an hour.  I was really surprised to receive a complimentary two-night hotel stay in the mail last month since I didn't play much, but decided to check it out this past Labor Day Weekend. Rates at this time of writing were $55 a night for a standard room. Wifi and parking are also included. This is worthy to note because some hotels  nickel and dime you for everything, even if you receive a "free" night!

The hotel is modern, decked out in a spectrum of black, white, and silver. Hints of pink can also be found.  This sculpture greets you when you arrive and sets the tone for this artsy hotel.

While still being considered part of the Strip, it is at the very tail end, which I didn't mind.  One, the hotel is right off the Sahara freeway exit, making it super easy to get in and out.  Two, you're about 5 minutes away from Downtown Las Vegas, which is my favorite place to hang out, play and grab some eats. However, many people love to walk up and down the Strip and casino hop.  The closest casino is the Stratosphere, but in the 100+ degree heat, I didn't feel like going outside much! This might be a deal-breaker for some of you.

The casino is really small, smaller than our Indian casinos here in San Diego even.  I didn't mind it though because I still found and played my favorite machines!  Not only did I receive two complimentary nights (including weekends and no resort fee!) but I also got a decent amount of free play!  Before our first day was over, I earned enough points playing slots to get a $25 Best Buy card, one of the current promotions the casino is running on Saturdays!  Score!

The hotel uses a lot of mirror imaging to make the casino look larger. Because the casino is small, the parking structure is not far, the check in desk is pretty much right where you enter and so are the tower elevators! Proximity is a plus! This shabby chic chandelier is found in the elevator section. A couple years ago, a nearby hotel had us waiting for the elevator for 20 plus minutes as they only had one working.  ONE, for the entire tower!  Here, at SLS, the elevators are fast and plentiful! I hate to say that these kinds of things matter, but they do.

This is the hallway to our room. It was like we were entering an icicle forest made up of black trees.﻿

This is a picture of the standard room.  Notice the use of mirrors again on both sides of the room.  I liked it!  The couch helped greatly just to have an extra place to sit and watch TV and/or put your stuff on.  This was a family trip so we needed the space.  We also had a rollaway bed brought up for the extra bedding. It fit right in the corner and wasn't in the way at all! The bathroom was also spacious as well, with a shelf right below the mirror to put your toiletry items.  It also had a vanity mirror for ladies to do their makeup up close and personal. Again, details! I do wish there was a mini-fridge though since my son drinks a gallon of milk every 4-5 days! That would have been very convenient to keep our drinks cold.  We ended up bringing a cooler with us. There is a mini-bar and snacks available, but at your typical outrageous hotel prices. 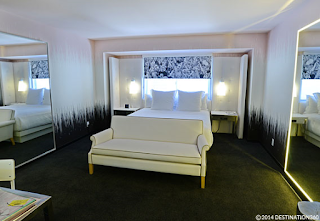 Here's another view of the room: 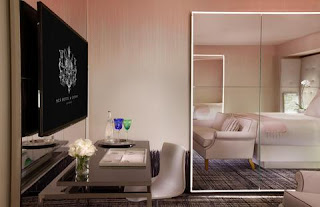 The black, white and pink theme keeps things looking clean and classy. When I stay at a hotel, I immediately get on the phone to housekeeping to request two things: more pillows and towels! These were delivered pretty fast. One thing I noticed was they have many staff working at the hotel, cleaning constantly, opening up the doors, manning the entrance to the different towers, everywhere you look there's someone to attend to you.  Another plus!

We ate at North Side Café for breakfast.  The food was standard and EXPENSIVE! We ordered three entrees and it came out to like $20 bucks each!  (Not shown were the eggs and bacon with the pancakes) Now, if I had a fridge in the room, my son could have eaten some cereal and I could have packed some fruit or something!

Other places to eat include a pizza place, called 800 degrees, there's Japanese fare at  Katsuya, and Bazaar Meats is the hotel steakhouse, Umami Burger is where you'll find burgers and there's dim sum and Chinese food at Ku Noodle.   Ku Noodle currently has a $19.88 lunch special that includes a starter, entrée and Taiwanese shaved ice!  I loved the rice sacks display at the top of their shelves in the restaurant. It made me feel at home!

Ok, so that's the skinny on rooms and restaurants.  What about entertainment you say?  Well this is where I believe SLS is for the chic and sexy, not really for the fam bam.  They had a steady stream of millennials walking around in swimwear couture for their daytime and nighttime pool parties.  Talk about barely there clothing.  I could have sworn we were at Crazy Horse or something, I never saw so many bejeweled bikinis!  That scene I didn't care for.  I guess that's where the crowd is going and that's why my slot machines were available!  They had some decent names coming in at night, Flo Rida was there on Saturday.  Lil' Wayne and some other guy were there on Sunday night for the Labor Day weekend.  Plain White T's were scheduled to come in next week.  If you're a hotel guest,  you get complimentary admission.  I'm not sure how much it is.

I still have free nights for the next couple of months, but I don't think I'll be bringing my family with me to stay there. Too expensive to eat and not really much for the kids to do.  If we go, it'll just be me, my hubs and my bejeweled bikini, ......just kidding!! HAHAHA, even I have to laugh at that one! Hey, I'll go back to SLS to get another Best Buy card though, but I'll be sure to eat my breakfast and shaved ice in Chinatown before I arrive! Thanks for the Labor Day Weekend fun SLS - So Long Summer!﻿