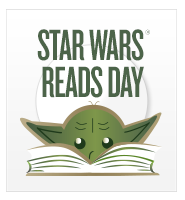 Our local Barnes and Nobles store was one of the stores that had a free event for "Star Wars Reads Day" today, October 10, 2015. The store was decked out with all kinds of Star Wars merchandise as the anticipation rises for the movie coming out in December.  The Star Wars soundtrack played in the background as customers shopped and read!

Aren't these socks so cute!

I loved that the event was low key and although reservations were taken earlier in the days leading up to the event, all the kids in the store were invited to participate.

The LEGO make and take activity was a miniature Millenium Falcon!  There were also posters and bookmarks as giveaways.

There was even a special cookie on sale in the cafe!

We thought that was all to the activity, but lo and behold, special guests came out to talk and take pictures with the Star Wars fans!  Unlike being at an amusement park, there was little to none waiting time to take pictures with Darth Vader, the Storm Troopers and the Tusken Raider!

What a fun and cool activity, especially for Halloween month! Some of the die-hard Star Wars fans were even dressed up! Thank you Barnes and Nobles for having a great event!  Sign up to receive notifications of special events at your local store today!
Posted by LoraSaysSo!